Who’s World Is This?

“And God said, Let us make man in our image, after our likeness: and let them have dominion over the fish of the sea, and over the fowl of the air, and over the cattle, and over all the earth, and over every creeping thing that creepeth upon the earth.” God

Who’s world is this? This fundamental question is important in our understanding of what role we are to have on planet Earth.

I know that many do not accept the Biblical story in Genesis but it is a good starting place. The Old Testament is recognized by Jews, Christians, and Muslims and that constitutes a good amount of people. Basically, God put man in the Garden of Eden to tend it. God never gave man ownership of the garden but rather stewardship. His role was to enhance the Garden for the pleasure of God and not to do as he saw fit. Also, it is very important to note that God never gave Adam dominion over other men.

Where do kings get their claims on their power or even governments at that? There is a lot to be said about the ‘divine right’ of kings but that is not a Biblical term. The divine right says that God gave the kings the right to rule, but the truth is that the source of power is more nefarious. That is power had been seized by the violence of the sword or the gun.

The question should be asked if whether one can actually own a piece of the Earth? While this might sound absurd to some it was a practice of the Native Americans, that nobody could own the Earth. What I understand of their culture is that people had a right to the livestock on pieces of land but they didn’t own the land itself. This worldview supports the idea that the Earth is, in fact, a living being. That concept if a very important one for if we hold that view then we cannot do whatsoever we desire. That is rape and exploitation of planet Earth for the commercial goals of an industry is a grand violation.

If nobody can own the Earth than the only option for life would be communal. There would be no grand gated mansions for the rich and no huts of squalor with leaky roofs for the poor. Instead, there would be adequate facilities for all. In the United States today we waste so much for our selfish interests. Every person has their own kitchen, their own washer and dryer, their own bathrooms and so forth. If we simply shared these things we would consolidate space. With the greater interaction, we would become a closer people. In the United States, some people don’t even know their neighbors. This is especially true in the city. All this isolation makes for bad mental health, we are alone in the masses, thirsty on the ocean.

The government claims the right to all lands. Nobody in the United States owns what they live in. That is the whole idea of taxes, that at best we are renting from the government with some rights. Eminent Domain can be invoked at any time to take away your land.

And what right does the government have to even make laws to rule over us? They say that we democratically elect our leaders but that is a fallacy. The truth is that more people who could vote don’t even vote. This apparent apathy is founded on the idea that neither of the two major parties represents the people. But when did God ever give man dominion over his fellow man? When Israel asked for a king to rule over them God stated that the people were rejecting God.

So we are living unnaturally in a perverted world based on a bad system. There is a direct link between our social practices and mental health. People in the United States are more and more being treated as automatons or machines. Everybody is known by a number, their social security number. Education is like mass production where we are ushered as groups into classrooms taught standardized lessons. Our acceptance into colleges is primarily based on a series of numbers generated by grades and tests. In the efficiency, we are losing the humanity. Children are falling through the wide cracks and grow up into something ill. This whole diabolical system would be replaced with something better if we understood that man is not meant to rule and dominate but rather to foster and care, to be a servant, not a lord.

You see we take our first step pointed in the wrong direction and all our lives walk the highway to Hell.

Please check out this book of ideas written in an enticing language. “Letting It Out.” https://amzn.to/2OFIgYG 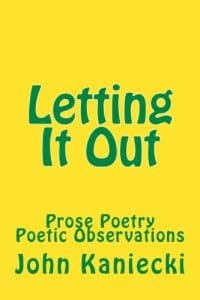