When The Well Runs Dry

“The long and winding road, That leads to your door, Will never disappear, I’ve seen that road before, It always leads me here, Lead me to your door” John Lennon / Paul Mccartney

Life is full of answers and questions. As a person who suffers from mental illness, I have seen my fair share of troubles. As a missionary to the inner city, I have seen the manifestations of a different culture. Life can be draining.

There was another mass shooting today. Without a doubt, the frequency of these mass murders is on the increase. If there is not one every week there is one at least every month. People in our society are being pushed beyond the edge. They are going to the well but the well is dry and empty. What can we do?

There was a time when the nation of  Israel was held with special regard by God. Unfortunately, they did not act righteously. God sent them a series of prophets with the identical message and that was to repent and turn back to the ways of the Lord. They rejected the messengers and insisted that all was well. They were God’s people and in fact, they had God’s temple. Nevertheless, God destroyed the nation of Israel.

So lesson number one, never think you are too high not to fall. If you would have told me that I would become mentally ill I would have vehemently objected. There are other tortures in life. My wife presently has dementia. Both my parents and my brother died from the wicked grip of cancer. It seems sadness and sorrow enter our lives and it is not a matter of if we are going to face evil but what particular kind of evil. It doesn’t matter what your position, place or wealth is, you are not immune.

Once God wiped Israel out he allowed a remnant to return. They eventually reestablished the nation. First, they repaired the temple and then they repaired the walls around the capital city of Jerusalem. The order is of supreme importance. The temple was their spiritual connection while the city was the Earthly connection.

Before you can help others you must get your own act in order. Think of a drunk trying to convince another to give up drinking. The Bible says to remove the beam from your own eye before you remove the mote from your friend’s eye. The best way to be a light to others is to be an example. After all the whole key to the thing is in the living. If a person is genuinely happy that will be crystal clear. They won’t be going around manipulating people, fornicating and using artificial substances to bring some thrill to their meaningless lives.

Once the internal is secured than one can work at improving their lot in the world. Helping others is perhaps the best way we can help ourselves. A life of service and dedication is perhaps the most fulfilling existence that one could attain. But they key here is work. We must always be working on things, trying to improve ourselves. Constantly making self-evaluations. We must also be diligent at our task not getting lazy or lax.

But we are not machines or automatons. We are human beings with conflicting wants and desires. Life will always be a struggle and we will always fail and fall short. Mistakes will sometimes happen. We will err in both little and major ways. Sometimes in the crucial hour, we will seek that hidden strength and fail. The well will run dry.

There is a lot to be said for failure. If one fails and learns valuable lessons then in truth it is not a failure or at least not a total loss. Sometimes things are not so quite black and white. Many experiences have both positive and negative aspects as there are few absolutes. I heard the story of Burt Reynolds who just passed away. He was a football star who hurt himself and could not make an attempt at the pros. Was it a failure? Perhaps but he kept on living life and wound up a movie star. In the long run, maybe it was a great blessing that he got injured. But I bet if you told him that at the time when he got hurt that he would not have seen it that way.

I desperately want to see my mental illness as a positive. Likewise, I want to feel that my wife’s dementia is a blessing. The jury is still out as my life hasn’t concluded. One thing that both of these episodes did was enhance my writing. In fact, I would never have written what I wrote if I didn’t get mentally ill. Perhaps it is pure ego and vanity but I want my words to be immortal. I want my dry well, my darkest hours, to be rivers of life and brilliant lights of blessings.

“Murmurings Of A Mad Man” is the first book I ever got published. It is poetry written in rhyme and strict meter. It has a new cover and a lower price. Please check it out and tell me what you think. https://amzn.to/2Ni5GGh 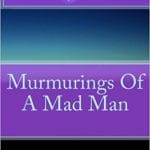