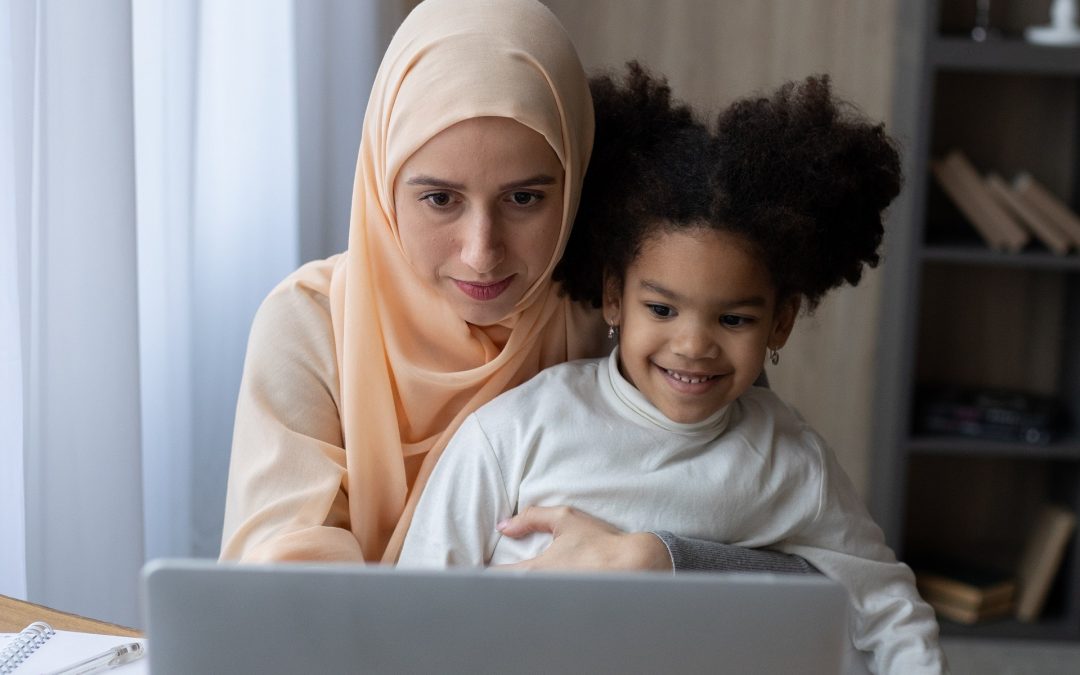 When the pandemic hit, I was lucky to have already been established in a remote career. The transition to virtual learning, however, was an entirely new playing field for me and for my children.

While it was stressful juggling my career, mom life, and my new role as assistant teacher, it also gave me insight into my children’s lives outside of our family. I got to see a number of things firsthand that, during a normal year, I would have missed. I saw how my children interacted with their teachers and peers, how they viewed daily successes and failures, how they engaged (or didn’t) with ideas and subjects, how they felt about the world’s events, and also, where they were struggling.

By engaging with my children more closely in ways I hadn’t previously, I was able to pick up on nuances that allowed us to come together to explore feelings and struggles that otherwise may have continued to fly under the radar. These struggles included depression, anxiety, and ADHD.

While I am no stranger to mental health challenges, the journey into coping with mental health challenges with my children was scary, and even a little sad. I hoped they’d never have to face those struggles. At the same time, it opened new areas of our awareness that I’m incredibly thankful for, and it also reshaped how we operate as a family.

Of all the amazing things I learned about my children during virtual learning, these lessons stand out:

Their Souls Are Deep

As a parent, it’s easy to envision your kid as who you think they are, and jumbled by the hustle and bustle of life, we sometimes get lost in who we think they are versus who they actually are. You get an entirely different perspective when you witness your children as who they are outside of family dynamics, especially when they’re in their zone.

In watching my children over the past year, I saw that their core personality was still there, but their insight, thoughtfulness, and passion in the “outside world” was a wonder to see. It gave me tremendous hope and pride in the people they will become.

I’ve always been an advocate for holding space for kids and not demeaning them because they don’t have “adult problems.” I found out, though, that a lot of kids struggle with not being heard by their parents, and sometimes they’re outright ignored. This is particularly prevalent among the mid-to-late teen group.

I’d encourage more parents to hold space for their kids, even when their issues don’t seem like an issue to you. Simply be there. Ask, “What type of support do you need from me? Do you want me to listen or provide feedback? Or both?” Then…listen. If they want feedback or actionable help, provide it just like you would anyone else—without guilt, shame, or exasperation. Working together is a real game-changer for kids.

Stepping into the world of a diagnosed disability was new for our family. There was a lot of feedback on not oversharing with our child or letting their disability define who they are. I agree that it shouldn’t define who they are, but because it is ultimately a part of their life experience, I felt that understanding and accepting the disability would foster connection.

I was entirely transparent with my child about their ADHD diagnosis, and it was a turning point. Suddenly, things fell into place that had once been such a struggle—feelings made sense, thought patterns were understood, and habits were formed to provide support.

Kids are highly intuitive, and even when we think we’re doing the right thing as parents by shielding them, we’re not necessarily making the right choice. Kids pick up on things, and withholding certain information can make them feel confused or lied to. Alternatively, being open, honest, and transparent in an age-appropriate way helps them make sense of the world around them and lessens self-doubt.

As a child, I was desperate for my mom’s acceptance, encouragement, and love—more so than I’d like to admit. With my children, I’ve been very intentional and have always strived to offer encouragement and to be open and accepting of their thoughts and ideas.

What surprised me through the virtual learning year was how much that encouragement, acceptance, and love helped drive them. Even when they were happy and doing well, small gestures like a high-five, acknowledging that they’ve been working hard, or just giving them a hug further motivated them. Even my oldest child, a senior in high school, was boosted by an impromptu note, delivered snack, or simple check-in. It was a real wake-up call when I realized that, even when they say they don’t need you, they still want you just as they did when they were young.

They Know Who They Are

Working from home with my children participating in virtual learning allowed all of us to flex our muscles in this area. We kept communication open and honest, but I stepped back. I spent the year allowing them to test-drive their own big decisions. When there were conflicts, we could discuss different options, but sometimes I had to let them make a mistake (even when it was excruciatingly hard). At the end of the day, though, they made decisions that were right for them, and when things went sideways, they learned how to get back on track.

Virtual learning was a struggle for everyone involved, but I’m thankful for the time and perspective it gave me. And when I look back at these dark days we’re all living through, my heart will remember the time and insight I gained with my kids.

Jessica Howington is the Senior Content Manager for the award-winning site FlexJobs, where she strives to support those in search of flexible employment by providing job search information, tips, and insight into the employment world and flexible workplace.