The Horror Of Evil

“For thou hast said in thine heart, I will ascend into heaven, I will exalt my throne above the stars of God:” Satan in God’s Word.

There are two paths in life that one can take, that of the servant or that of the lord, it is the difference between good and evil.

The path of evil is one of selfishness. It is following the mantra of ‘Look out for number one.’ By nature, evil is carnal and void of spirituality. Evil is a close kin to greed and materialism. Now that we know some of the basic qualities we can identify the wickedest segment of society. It is those who use their God-given abilities to accumulate massive amounts of Mammon at the expense of others.  Amazon comes to mind. The owner is supposed to be one of the richest persons in the world while his employees live in abject poverty. The same, I am told, holds true for Walmart.

Of course, this blatant greed is but a shadow of the Satanic evil which dominates the business of war. First of all resources, talents, and lives are siphoned off from positive things to create a war machine. Secondly, the wars are waged on lies. The United States is not waging a war on terror but rather an aggressive war to secure resources. The fruits of this evil are readily seen in broken lives, destruction and immense ill will and hatred created.

By nature, evil is an isolating quality. Friendship is something based on love and compassion and anyone practicing evil will not have these qualities. Look at Donald Trump for example. His lawyer said statements boasting of his great loyalty. Now the same lawyer is supposedly working to produce evidence against Trump. Of course, Trump is one quick to throw somebody off of the boat as demonstrated by the instability of his advisors and cabinet.

So to sum it up evil is self-centered, egotistical, materialistic and greedy. But I want to emphasize one key element. Evil propagates itself over a lie. There is ample evidence in history of this. Wars started over false flag attacks, such as the Vietnam War and the Iraq War. There was no attack in the Gulf Of Tonkin and there were no weapons of mass destruction in Iraq. So for an evil person, they have no qualms about lying even if it will bring death and destruction to millions of people.

No here is where the understanding gets very tricky. Evil does not want to perceive itself as evil, for the most part. Look at the evangelicals who claim to follow the teachings of the Bible. Where God commands us to “Love our enemies and to turn the other cheek,” these so-called people of faith are zealous for war. Look at the Catholic Church where sexual abuse is rampant and worse covered up. If you asked the evangelicals if they were evil or the bishops that allowed the perverse molestations to go unpunished if they were evil they would be greatly insulted.

The proof of the whole thing is in one’s fruits. A tree will be known by their fruits. If at the end of the day you are responsible for wanton destruction or some other great negative you are evil. I don’t care whatever justification you want to spin off that is the bottom line. Engineers building weapons of mass destruction will claim patriotism. Tell that to the mourning families of the mangled bodies.

So what are we to do in the face of this evil which saturates our society and is destroying our world at a rapid pace. We are to repay evil with good, it is as simple as that. We cannot become the beast in trying to destroy the beast. If it is wrong to kill then that is true under any circumstances.

By living a righteous life one leads by example. This is the strongest teacher. None are perfect, that is certain, but we are not all evil. Telling the truth is also a mighty weapon. In the funeral of John McCain, the revisionists were rewriting history, making a warmonger into something else. The example of John McCain is a good one to examine. You can say all you want about his personality or getting along with people, I will point to the filled coffins because of his votes in the Senate. 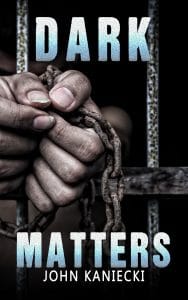 we must love no matter what. We must expose the lie and tell the truth. We must do the right thing though it costs us all.

Please check out my science fiction book called “Dark Matters.” I am sure you will enjoy it. https://amzn.to/2Ma1804