Does Carelessness Mean You Don’t Care? 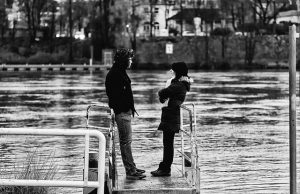 I don’t know what all the ingredients are that are necessary for having a positive relationship with someone who has ADHD – whether that’s a romantic relationship, a professional relationship or a platonic relationship. But I’m fairly sure one of them is being able to separate “carelessness” – more accurately, inattentiveness – from not caring.

A common reason people’s ADHD symptoms can provoke an emotional reaction from others is that those symptoms come across as simply not giving a damn.

Losing track of time and being late. Forgetting to do things you said you’d do, or not getting around to doing them. Not listening attentively. The list of behaviors associated with ADHD that can be interpreted as being self-absorbed or inconsiderate goes on.

In some situations, these behaviors are an indication that someone doesn’t care. But when the person doing these things has ADHD, that’s often not what’s happening. These behaviors can all result from inattentive symptoms or from impaired executive functions.

A lot of misunderstandings in relationships where one of the people involved has ADHD arise when the other person interprets inattentive behaviors as instances of the person with ADHD just “not caring.” Once again, this applies for many different types of relationships.

The thing is, if someone has ADHD, these behaviors aren’t going away. That person might be able to manage their symptoms and find coping strategies, but they’ll likely never stop having inattentive symptoms altogether.

There are takeaways here both for people with and without ADHD. For people without ADHD, the takeaway is that making the relationship sustainable means developing the understanding that inattention is independent of whether or not someone with ADHD cares.

For people with ADHD, the takeaway is that it can help to explicitly explain this to people. Something along the lines of “sometimes I do such-and-such, and I want you to understand that it’s not because I don’t care” can go a long way. It’s up to you whether you want to bring ADHD up by name or simply let the other person know that you have this behavior.

It’s frustrating for everyone involved when ADHD symptoms get misinterpreted in this way. But the good news is that it really is possible to minimize these misinterpretations by communicating and separating out the concepts of inattention and not caring.