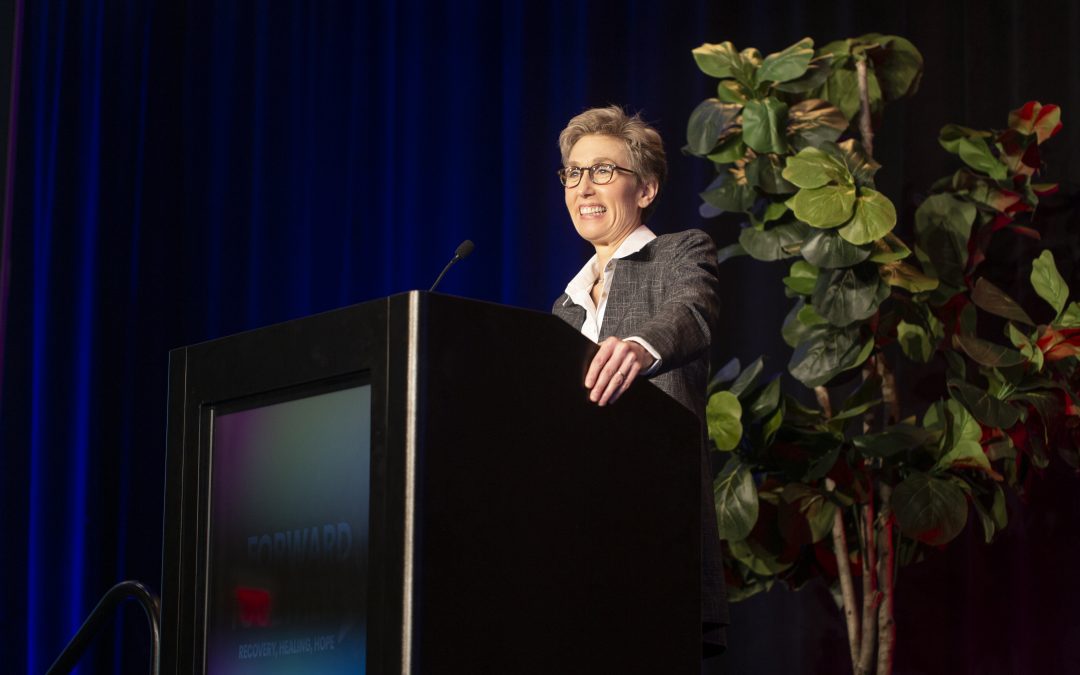 MHA President & CEO, Schroeder Stribling announced the focus of MHA’s 2022-2025 strategic plan: “Next Gen Prevention.” Stribling took the stage to welcome 400+ in-person attendees and over 8,000 virtual attendees with a call to action.

“We are here united in a common purpose as providers, advocates, allies, people with lived experience, and family members. We are here as a powerful coalition with reach and with impact. And we have a public mental health crisis on our hands. This is our signal. This is our call to action. And it’s a call we’re ready to answer.”

She previewed the organization’s three-year strategic plan centering on “Next Gen Prevention.” She said MHA would focus on the current mental health crisis of our youth while continuing to emphasize screening, early identification, and early intervention.

Multi-platinum Pop Artist Andy Grammer encouraged authenticity, performed “Love Myself,” and “Don’t Give Up On Me.” In one of his first-ever large speaking engagements, Andy Grammer spoke about starting to identify as someone who needed help during the COVID-19 pandemic. He recalled a moment when he was told that his music was number one in the world on Spotify for music tagged as “happy,” but said he didn’t feel that way internally. “Happiest guy on Spotify, super depressed,” he said. In order to get through it, he said he had to write himself a love song and he performed his track, “Love Myself” for the audience. He also spoke of the power of being authentic and said by doing the work involved with authenticity, “it takes me so much further than where I’ve imagined I’m supposed to be.” He closed by saying, “I didn’t think a couple years ago that I was supposed to be here, but I super am, so thank you for having me.”

MHA’s 2022 Clifford W. Beers Award was presented to Sally Zinman. The Clifford W. Beers Award is MHA’s highest honor. Created in 1976, it has been presented annually to a consumer of mental health and/or substance abuse services who best reflects the example set by Beers in his efforts to improve conditions for, and attitudes toward, people with mental illnesses. Sally Zinman has been a pioneer of the mental health peer movement since the mid 1970’s. Sally’s commitment to the rights of people with mental health challenges came from her own horrendous experience in the mental health system. Sally accepted the award virtually saying it was for all those working in the peer movement, “I believe this award is for them because I carry them in my heart and in all my actions and words.”

Rachel Harlich, LMSW led a breakout session about harnessing your body’s wisdom and power for deep self-care. “If stress and emotion are a bodily experience, so are healing and wellness,” she noted.

Cecilia McGough, Shira Agam, Emeka Chima, Laura Kordowski and Dominique shared their experiences as students living with psychosis. “Even though severe illness seems so dark in the media, it is not. We are full of light,” said Dominique as she shared her story.